The Laboratory of Nanochemistry and Ecology, Institute of Ecotechnology and Engineering, National University of Science and Technology (MISiS), Moscow - Russia

Climate change and global warming have become a challenging issue affecting not only humanity but also flora and fauna due to an intense increase of CO2 emission in the atmosphere which has gradually led to amplification in the average global temperature. Hence, a number of mechanisms have been promoted to diminish the atmospheric commutation of carbon dioxide. One of the well-known techniques is Carbon Capture and Storage (CCS) which mechanism is based on capture and storage vast quantities of CO2, as well as Carbon Capture and Utilization (CCU) which mechanism is based on CO2 conversion to liquid fuels (e.g. methanol, hydrocarbons, dimethyl carbonate, propylene, dimethyl ether, ethylene, etc.). Particularly, methanol (CH3OH) is a key feedstock for industrial chemicals, which further can be converted into high molecular alternative liquid fuels. In this regard, hydrogenation of CO2 is one of the promising, effectual and economic techniques for utilization of CO2 emission. Nevertheless, the reduction/activation of CO2 into useful liquid products is a scientifically challenging issue due to the complexities associated with its high stability. Thus, various catalysts have been applied to reduce the activation energy of the hydrogenation process and transform CO2 into value-added products. Thereby, this review article highlights the progress and the recent advances of research investigation in Cu and Fe-based catalytic conversion of CO2, reaction mechanisms, catalytic reactivity, and influence of operating parameters on product efficiency. 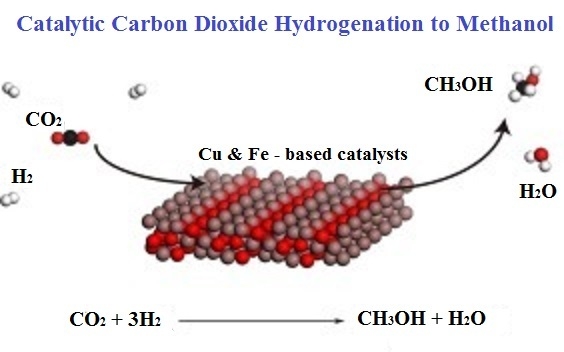