A combination of Large-Eddy Simulation (LES) and Particle Image Velocimetry (PIV) was utilized to investigate the three-dimensional in-cylinder flow within an optically accessible Direct Injection Spark Ignition (DISI) engine at motored engine operation. The PIV measurements were used to guide the meshing procedure by identifying the regions were refinements and improvements were needed. From the iteratively optimized meshes LES results are shown from two selected meshes, an intermediate coarse mesh and the final optimized mesh, and compared to PIV measurements. The evolution of the intake flow and the tumble in the central tumble plane during compression are presented and discussed. Exploitation of the LES results allowed showing the influence of out-of-plane velocities along the cylinder liner impacting the formation of the tumble flow. The optimized mesh was then used to investigate the influence of the spark plug on the in-cylinder flow. For the studied engine the spark plug had a significant impact on the evolution of the tumble flow during compression. Finally 35 engine cycles were simulated using the optimized mesh with the spark plug in place. Velocity distributions in a region below the spark plug are shown and compared with PIV results. The two-sample Kolmogorov-Smirnov test revealed a strong similarity between the velocity distributions obtained by PIV and LES, thus validating the potential of LES for investigating cycle-to-cycle variability. 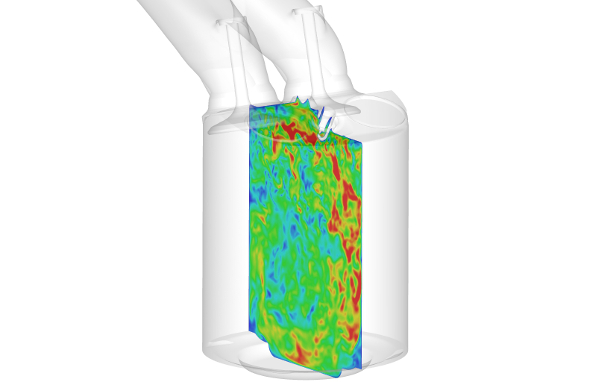