An analysis of Transparent Combustion Chamber (TCC3) engine Large-Eddy Simulation (LES) result was carried out to investigate Cycle-to-Cycle Variation (CCV) correlation between in-cylinder swirl ratio and flow in the valve seat region of the intake port to address a challenging question on “What causes CCV of in-cylinder flow”. Polar Velocity (PV) profile, mean velocities normal to a ring-shaped cutting surface in the valve seat region, is calculated to depict intake port flow. A Net Polar Velocity (NPV) can be defined by performing the vector sum of the polar velocity around the intake valve. A standard deviation of PV is also calculated from azimuthal distribution of PV magnitudes relative to its mean value. The analysis of 18 LES cycles of TCC3 engine with a two-valve, pancake-shaped combustion chamber shows that similar CCV of in-cylinder swirl ratio patterns are observed at different crank angles from Intake Valve Opening (IVO) to Exhaust Valve Opening (EVO). Further analysis shows clear correlations of CCV between in-cylinder swirl ratio and NPV magnitude and the standard deviation of PV at selected crank angles from IVO to EVO. The correlations get significantly better with the ring-shaped cutting surface moves from up-stream to downstream of the valve-seat region. This study reveals that the CCV of in-cylinder swirl ratio is built up gradually from upstream to downstream in the intake port and valve-seat region. Further evaluation of the analysis method is planned for a four-valve engine as an evaluation metric for better engine intake port design and combustion chamber optimization. 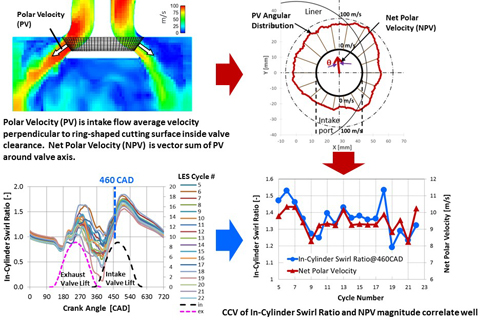