Capillarity and phase-mobility of a hydrocarbon gas–liquid system

When oil fields fall during their lifetime below the bubble point gas comes out of solution. The key questions are at which saturation the gas becomes mobile (“critical gas saturation”) and what the gas mobility is, because mobile gas reduces the production of oil significantly. The traditional view is that the gas phase becomes mobile once gas bubbles grow or expand to a size where they connect and form a percolating path. For typical 3D porous media the saturation corresponding to this percolation limit is on the order of 20%. However, significant literature report on gas mobility below lower limits of percolation thresholds i.e. below 0.1%. A direct experimental insight for that is lacking because laboratory measurements are notoriously difficult since the formation of gas bubbles below the bubble point includes thermodynamic and kinetic aspects, and the pressure decline rates achievable in laboratory experiments are orders of magnitude higher than the decline rates in the field. Here we study the nucleation and transport of gas coming out of solution in-situ in 3D rock using X-ray computed micro tomography which allows direct visualization of the nucleation kinetics and connectivity of gas. We use either propane or a propane–decane mixture as model system and conduct pressure depletion in absence of flow finding that – consistent with the literature – observation of the bubble point in the porous medium is decreased and becomes pressure decline rate dependent because of the bubble nucleation kinetics. That occurs in single-component systems and in hydrocarbon mixtures. Pressure depletion in absence of flow results in critical gas saturations between 20 and 30% which is consistent with typical percolation thresholds in 3D porous structures. That does not explain experimentally observed critical gas saturations significantly below 20%. Also, the respective pore level fluid occupancy where pores are filled with either gas or liquid phase but not partially with both as in normal 2-phase immiscible systems rather diminishes connectivity of gas and liquid phases. This observation indicates that likely other mechanisms play a role in establishing gas mobility at saturations significantly below 20%. Experiments under flow conditions, where gas is injected near the bubble point suggest that diffusion may significantly contribute to the transport of gas and may even be the dominant transport mechanism at field relevant flow rates. The consequence of diffusive transport are compositional gradients where locally the composition is such gas nucleation may occur. That would lead to a disconnected but mobile gas distribution ahead of the convective front. Furthermore, diffusive exchange leads to ripening and anti-ripening effects which influences the distribution for which we see evidence in pressure depletion experiments but not so much at low rate gas injection. Respective relative permeability computed from the imaged fluid distributions using a lattice Boltzmann approach show distinctly different behavior between pressure depletion and flowing conditions. These findings suggest that capillarity in a gas–liquid hydrocarbon mixture is far more complex than in a 2-phase immiscible system. Capillarity is coupled to phase behavior thermodynamics and kinetics on a fast time scale and diffusion-dominated mechanisms such as ripening and anti-ripening effects at a slow time scale. While the consequences for the current experimental and field modelling approaches are not yet fully clear, this shows that more research is needed to fully understand these effects and their implications. 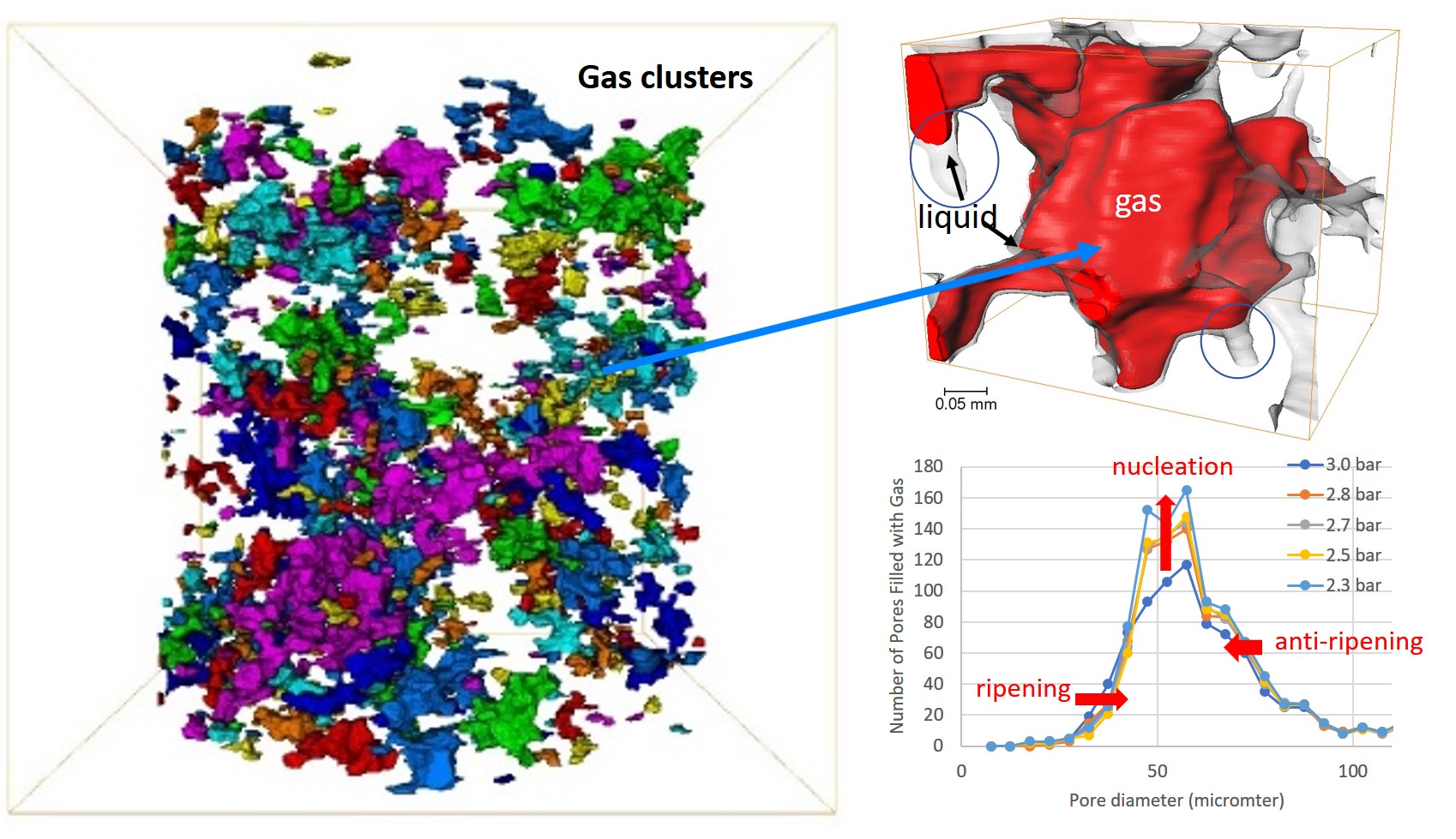