New evidence supporting views previously expressed in a paper dedicated to the thermodynamic behavior of gas storage caverns (Bérest, 2019, Heat transfer in salt caverns, Int. J. Rock Mech. Rock Eng. Sci. 120, 82–95. https://doi.org/10.1016/j.ijrmms.2019.06.009) is provided. In a fluid-filled cavern, conditions for the onset of natural convection are always met, at least in principle. In fact, for gas storage caverns, convection is present in the upper part of a cavern, where gas temperature and moisture content tend to homogenize. In the lower part of a cavern, below the temperature-gradient inversion depth, temperature is a decreasing function of depth, and no convection is observed. The reason is that brine trapped in the cavern sump remains consistently colder than the rock mass, even decades after cavern creation. Sump brine is cooled during each gas pressure cycle: most often, during depressurization, condensation of water vapor occurs; it is spread in the entire gas body from which latent heat is withdrawn, resulting in “raining” in the cavern. During re-pressurization, vaporization takes place at the gas-brine interface, where latent heat is provided by the brine sump, resulting, during a cycle, in net cooling of the brine sump. This process is more effective when a larger number of cycles per year is run. The buffer created above the brine-gas interface hinders vapor diffusion to the cavern main body. It is hypothetized that, when cavern pressure is cycled more frequently, water content in the withdrawn gas is smaller. This might be an advantage in natural gas caverns, as hydrate formation is lessened, and in hydrogen or compressed air caverns, as less dehydration efforts are required. 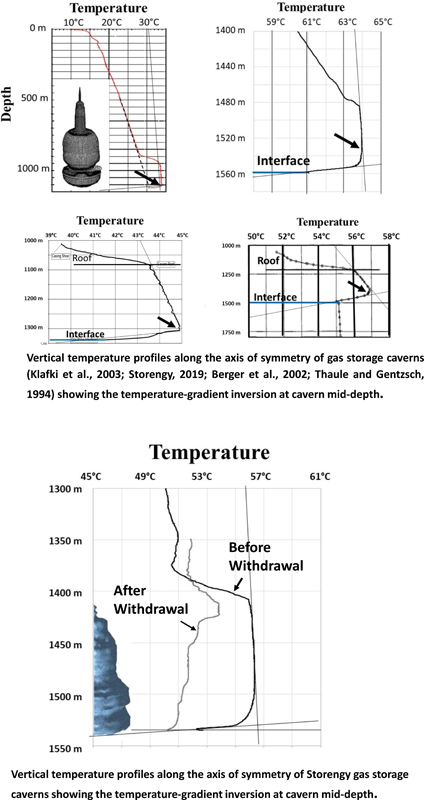