This work deals with the influence of partial saturation on the transport process of a passive tracer. Transport experiments were done in a water-wet glass micromodel combined with specific optical techniques. Full water saturation was achieved by injecting initially the background solution and then the tracer, whereas for the partial saturation conditions, the micromodel was initially saturated with oil, and then sequential the background solution and the tracer were injected at the same flow rate. We have shown that in the investigated range of water saturations it exists a transition in the oil ganglia structure and size. For high water saturations oil ganglia have one or two pores in size, however for lower water saturations they comprise an important number of pores. Transport strongly depends on the size distribution of the oil ganglia as they create large percolating paths and stagnant zones. We also showed the existence of two different types of stagnant zones: zones accessible by diffusion into pores and zones only accessible by spatially limited diffusion in films. The major advantage of using glass micromodels lies in the fact that dispersion coefficients can be computed from concentrations averaged over the pore space or from concentrations at the outlet and simultaneously from spatial concentration profiles. Curves were fitted using the Advection–Dispersion Equation (ADE) with adequate boundary conditions. The fitting quality of the temporal evolution of the average and outlet concentration was very good. However, fitting of the concentration profiles could only be done for the higher water saturations. This is due to the fact that the Representative Elementary Volume (REV) of lower water saturations is larger than the micromodel. The results show that fitting the breakthrough curve in order to determine the dispersion coefficient in a partially saturated porous medium might be misleading. Indeed, when fitting the breakthrough curves we were able to compute a dispersion coefficient even in the case where the REV of the water saturation is larger than the micromodel. Consequently, the knowledge of the local concentration profiles as a function of time is necessary as it provides an additional information on the spatio-temporal behavior of the transport process and therefor a supplementary constraint of the fitting procedure. Finally, we observed a time dependent dispersion coefficient in the regime where oil ganglia comprise several pores. This fact might be attributed to the non-Gaussian nature of the transport. 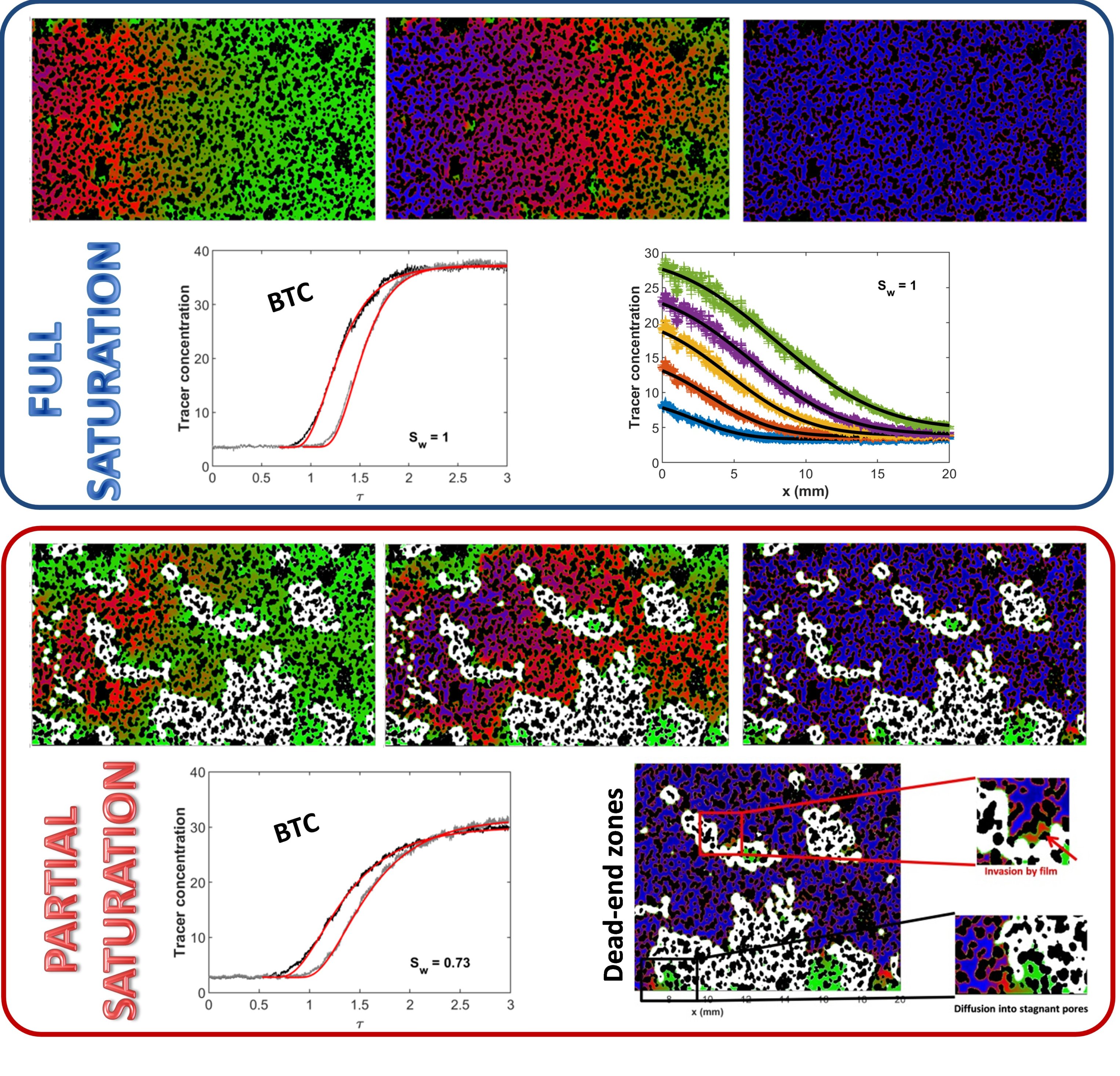