The depletion of oil reservoirs and increased global oil demand have given impetus to employ various secondary and tertiary oil recovery methods. Gas injection is widely used in both secondary and tertiary modes, though the major problem associated with this process is the precipitation and deposition of asphaltene, particularly at near-wellbore conditions. In-depth knowledge of asphaltene phase behavior is therefore essential for the prediction of asphaltene precipitation. Previous studies reported the impact of gas injection on asphaltene phase behavior, but the knowledge of precipitation of asphaltene as a function of different mole fractions of injected gas is also imperative. In this study, the thermodynamic model of PC-SAFT EoS is used to discern the phase equilibrium of asphaltene by analyzing the asphaltene drop-out curve during gas injection. Asphaltene drop-out curves of two different live oil samples are analyzed by injecting CO2, CH4, and N2 gases at different mole percentages and temperatures. The results revealed that PC-SAFT EoS can serve as a reliable tool for estimating bubble pressure and asphaltene onset pressure for a wide range of temperatures, pressures, and compositions. The simulation results for the injection of CO2, CH4, and N2 also showed that CO2 gas gives minimum asphaltene precipitation. It reduces the size of the drop-out curve or moves it toward higher pressures. CH4 and N2 expand the drop-out curve by raising the upper onset point. CH4 increases the maximum point of the drop-out curve for two types of oil studied (A and B) at two different temperatures. N2 raises the maximum point of oil type “A” by approximately 57% at 395 K, while it has no effect on the maximum point of oil type “B”. In addition, reducing the temperature resulted in either decrease or increase of asphaltene solubility, demonstrating that the impact of temperature on asphaltene precipitation is closely related to the composition of the crude. 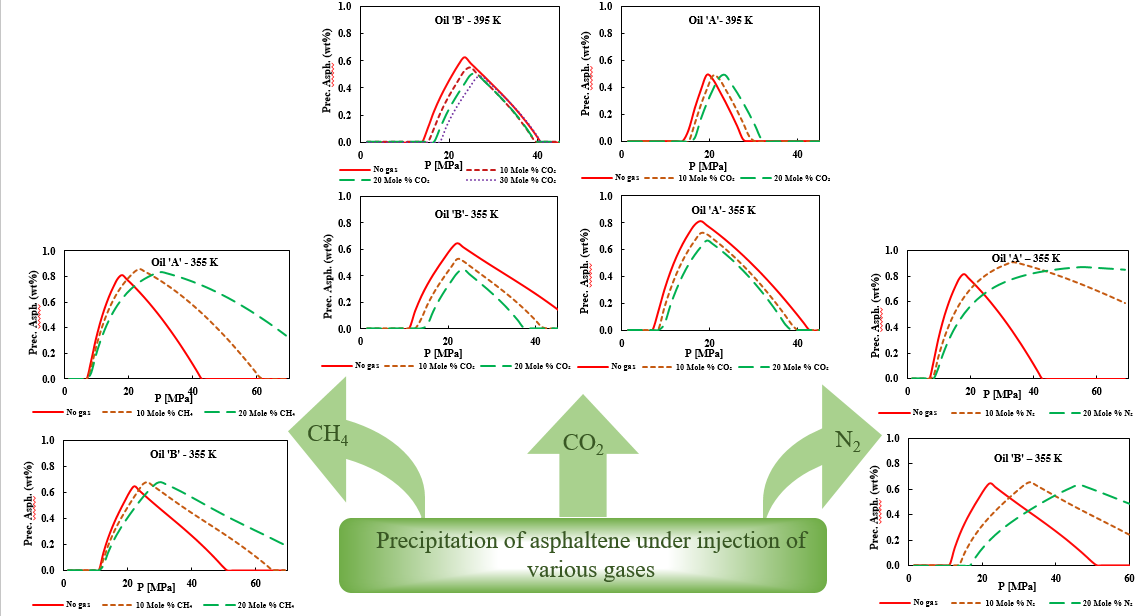