CFD simulation tools are increasingly used nowadays to design more fuel-efficient and clean Internal Combustion Engines (ICE). Within this framework, there is a need to benefit from a turbulence model which offers the best compromise between prediction capabilities and computational cost. The Hybrid Temporal LES (HTLES) approach is here retained within the perspective of an application to ICE configurations. HTLES is a hybrid Reynolds-Averaged Navier Stokes/Large Eddy Simulation (RANS/LES) model based on a solid theoretical framework using temporal filtering. The concept is to model the near-wall region in RANS and to solve the turbulent structures in the core region if the temporal and spatial resolutions are fine enough. In this study, a dedicated sub-model called Elliptic Shielding (ES) is added to HTLES in order to ensure RANS in the near-wall region, regardless of the mesh resolution. A modification of the computation of the total kinetic energy and the dissipation rate was introduced as first adaptions of HTLES towards non-stationary ICE configurations. HTLES is a recent approach, which has not been validated in a wide range of applications. The present study intends to further validate HTLES implemented in CONVERGE code by examining three stationary test cases. The first validation consists of the periodic hill case, which is a standard benchmark case to assess hybrid turbulence models. Then, in order to come closer to real ICE simulations, i.e., with larger Reynolds numbers and coarser near-wall resolutions, the method is validated in the case of a channel flow using wall functions and in the steady flow rig case consisting in an open valve at a fixed lift. HTLES results are compared to RANS k-ω SST and wall-modeled LES σ simulations performed with the same grid and the same temporal resolution. Unlike RANS, satisfactory reproduction of the flow recirculation has been observed with HTLES in the case of periodic hills. The channel flow configuration has underlined the capability of HTLES to predict the wall friction properly. The steady flow rig shows that HTLES combines advantages of RANS and LES in one simulation. On the one hand, HTLES yields mean and rms velocities as accurate as LES since the scale-resolving simulation is triggered in the core region. On the other hand, hybrid RANS/LES at the wall provides accurate pressure drop in contrast with LES performed on the same mesh. Future work will be dedicated to the extension of HTLES to non-stationary flows with moving walls in order to be able to tackle realistic ICE flow configurations. 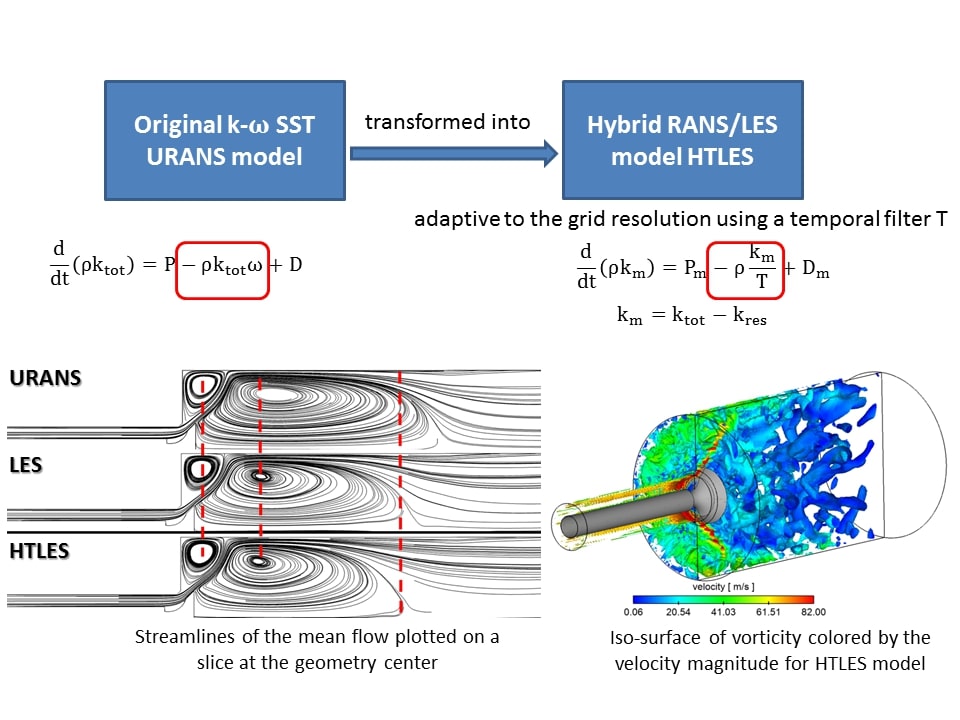