Reservoir management decisions are often based on simulation models and probabilistic approaches. Thus, the response of the model must be sufficiently accurate to base sound decisions on and fast enough to be practical for methodologies requiring many simulation runs. However, simulation models often forecast production rates different to real production rates for various reasons. Two possible causes of these deviations are (1) upscaling (a technique to reduce the computational time of simulation models by reducing the number of grid blocks) and (2) uncertainties (the values established to attributes are different from real values caused by lack of knowledge of real reservoir). Morosov and Schiozer [(2016) applied a closed-loop technique in a benchmark case where decisions taken using the simulation models are applied to a reference case. The optimized production strategy, using simulations models, increased the expected monetary value of the project by about 29%, but the Net Present Value (NPV), calculated using a reference case, decreased by 2%. The real NPV was outside the expected range and revealed that the set of models did not fully represent the real field, even for high-quality history-matched models. The objective of this study is to identify the causes of these discrepancies. To reach this goal, we investigate and analyze both the impact of the upscaling and the uncertainty on production and economic indicators. We use a set of representative models of benchmark UNISIM-I (Avansi and Schiozer, 2015) to consider the effects of uncertainty and upscaling. Our main concern was the uncertainties in the distribution of petrophysical properties that strongly influence the productivity and injectivity of wells, noted by Morosov and Schiozer (2016) as being the main cause for differences among models. Furthermore, to verify the isolated effects of the possible causes of deviation, we use a single model to show only the effects of upscaling, and another set of models showing only the uncertainty. The results showed that the impact of the uncertainties was higher than the upscaling for the studied case. The upscaling generated an optimistic bias for production and economic indicators, but well-correlated with the reference case. The uncertainties significantly affected the production forecasts for this study. This happened because the response of the wells is highly dependent on the petrophysical properties of the model, which varies widely between the different models representing uncertainties and was not adequately depicted by the representative models. 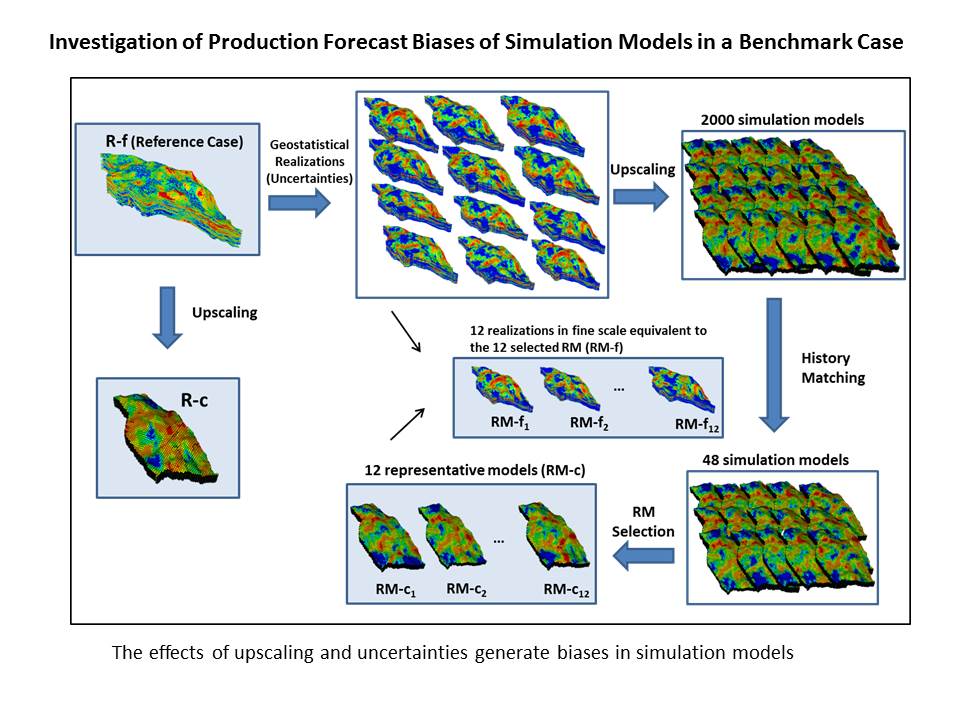