Mineral scaling has been considered a great concern for developing the oil production from the underground petroleum reservoirs. One of the main causes of this phenomenon is known as the chemical incompatibility of injected brine, frequently sea water, with the reservoir brine leading to the deposition of various supersaturated salts such as calcium carbonate, calcium sulfate and barium sulfate. In present communication, an evolutionary approach namely, Gene Expression Programming (GEP), was employed for rigorous modeling of formation damage by mineral scaling of mixed sulfate salt deposition. At first, a large databank of damaged permeability datapoints as a function of injected volume, injection flowrate, temperature, differential pressure and ionic concentrations of the existing chemical species in the porous media was employed. In this regard, a user-friendly correlation was extended for the first time by the aforementioned technique in the literature. Professional evaluation of the suggested GEP-based model was implemented by different statistical parameters and appealing visualization tools. Having proposed the GEP-based correlation, statistical parameters of the Average Absolute Relative Deviation Percent (AARD%) of 0.640% and determination coefficient (R2) of 0.984 was calculated. Accordingly, it is demonstrated that the proposed model has a superior performance and great potential for efficient prediction of damaged permeability due to the mixed sulfate salt scaling. Moreover, the implemented outlier diagnosis technique verified the validity of the databank used for modeling, as well as the high robustness of the suggested model was confirmed. In conclusion, the developed correlation in this work can be of enormous practical value for skillful engineers and scientists in any academic study and industrial applications dealing with mixed salt deposition. 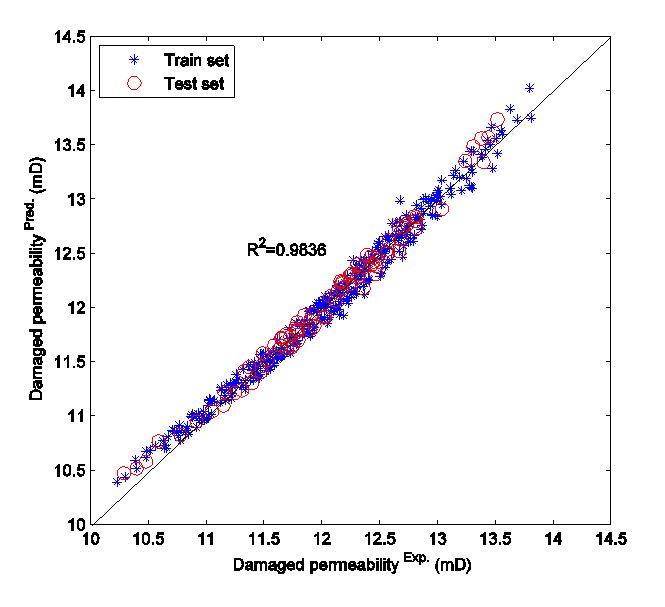