Generalizations and analyses are given of the data accumulated to date on the content of Organic Matter (OM) in formation waters of various stratigraphic complexes, as well as of mud volcanoes, and the correlation with OM in South Caspian Basin (SCB) sedimentary rocks. Results are based on about 300 analyses of formation waters and waters of mud volcanoes, as well as on more than 400 analyses of the content of OM in rocks (outcrops and wells from both onshore and offshore petroleum fields of the SCB). The stratigraphic interval covers the period from the Lower Pliocene to the Jurassic, and the depth interval from 73 m to 6043 m. In these intervals, the values of Dissolved Organic Matter (DOM) in reservoir waters vary from 4.1 mg/L to 271.2 mg/L, averaging (219 analyses) 48.9 mg/L. A good correlation has been established between the values of DOM and OM in rocks. Paleogene and Jurassic rocks have the highest correlations. DOM varies with depth with an increase in value from a depth of about 3.3 km, likely due to catagenetic transformation of OM into hydrocarbons in the rock–water system. The highest values of DOM are for waters with mineralization less than 50 g/L. Mud volcano waters are characterized by low levels of DOM and low mineralization, likely due to the condensate nature. The results of the studies show that underground water, as one of the components of a single rock–water system of the Earth’s sedimentary cover, together with the rocks, participates in the processes of hydrocarbon generation and migration. 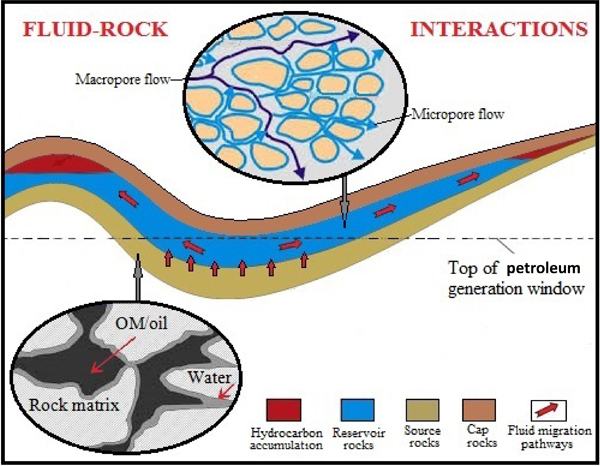