Water injection has been known as a conventional approach employed for years in order to achieve higher oil recovery from oil reservoirs. Since the last decade many researchers conducted on the water injection assessment suggested that low salinity water flooding can be an effective flooding mechanism and it can be used as an enhanced oil recovery method. Several examinations were conducted to identify governing mechanisms entailed in oil extraction and the effect of salinity and different types of ionic contents contained in Formation Water (FW) and injected fluid. This study is dedicated to address the influence of salinity and different types of ionic contents contained in formation water and injected fluid on incremental oil recovery. For this purpose, fluid–fluid and rock–fluid interaction were investigated especially for evaluating the effect of calcium ions in the formation water and sulfate ions in the injected water. Several experiments were carried out including core-flooding, contact angle, and imbibition tests. While former researchers concluded that reducing the salinity of injected water causing a decrease in ionic strength may lead to a greater oil recovery, in this research, we showed that these statements are not necessarily true. It was observed that existence of the high calcium concentration in the formation water would cause significant effect on wettability status of rocks and final oil recovery during low salinity water injection. This process is mainly due to rock wettability alteration. Wettability alteration mechanism in carbonate rocks is explained through interaction between rock and fluid composition. The results indicate the decisive role of calcium ions in the formation water at all stages from aging in oil to primary and secondary recovery. In addition to that, it was observed that more sulfate ion concentration in the injected water enhances rock wettability alteration. 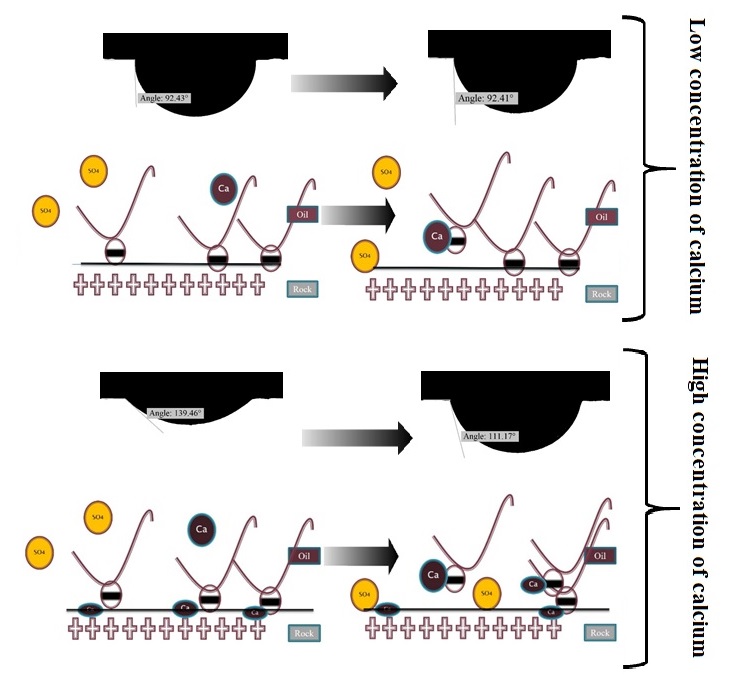