The use of existing geological and structural maps, previous 2D seismic profiles, boreholes and correlation models between these data is sufficient to understand basin structure and thermal systems on a regional scale. However, this is not sufficient on a scale of a geothermal site to be sure of the hydraulic connectivity (or of the presence of a permeability barrier) between two boreholes 1.5 or 2 km apart.

To ensure that there is enough hydraulic connectivity, it i s necessary to understand the controls on the network of fractures which affects the aquifer (fracture permeability) and the physical properties of the rock, namely the porosity and clay content in order to obtain a matrix permeability.

The latest generation of broadband (six octaves) 3D seismic reflection will provide the following information: the similarity attribute will give an accurate structural map of the fault network at the seismic resolution and, in many cases, at a higher resolution than seismic; seismic velocity anisotropy analysis techniques will make it possible to visualize a 3D volume of information on the fracture network [Michel et al. (2013) Application of Azimuthal Seismic Inversion for Shale Gas Reservoir – Proceedings of the 11th SEGJ International Symposium, Yokohama]; acoustic impedance inversion or petrophysical inversion techniques will predict the porosity throughout the whole volume of the aquifer from a porosity log recorded in a pilot-hole. It allows a real 3D mapping of predicted porosity inside the aquifer much more reliably than from modelling alone.

These seismic techniques were initially developed for petroleum exploration and development. They have rapidly progressed throughout the last decade, both in acquisition, processing and interpretation with new methodologies and high-performance softwares. They are efficient for modelling reservoirs to be produced.

And, consequently, they can be used for geothermal applications as data to design dual deviated drillings with horizontal drains in carbonate and clastic reservoirs – not only for new projects, but also to revisit old ones to improve their performance or develop another reservoir.

Broadband 3D seismic will secure the exploration of Triassic sandstones which stay an interesting prospect for deep geothermal projects.

New prospects are proposed in the Paris Basin: Regional faults overlap the substratum. Inside faulted zones, hydrothermal circulations arriving by convection at the top of granitic basement could be geothermal objectives, as in the Alsace Upper Rhine Graben.

The first site that will use this approach could be instrumented and used as an experiment with a small addition of measurements and sensors, thus becoming a showcase for geothermal energy in France. The objective of this experiment would be to determine the transit time, the heating time of the re-injected water and the circulation speed to define the optimal direction, spacing and length of drains, and also, to realize the thermal modelling of the site for different options. 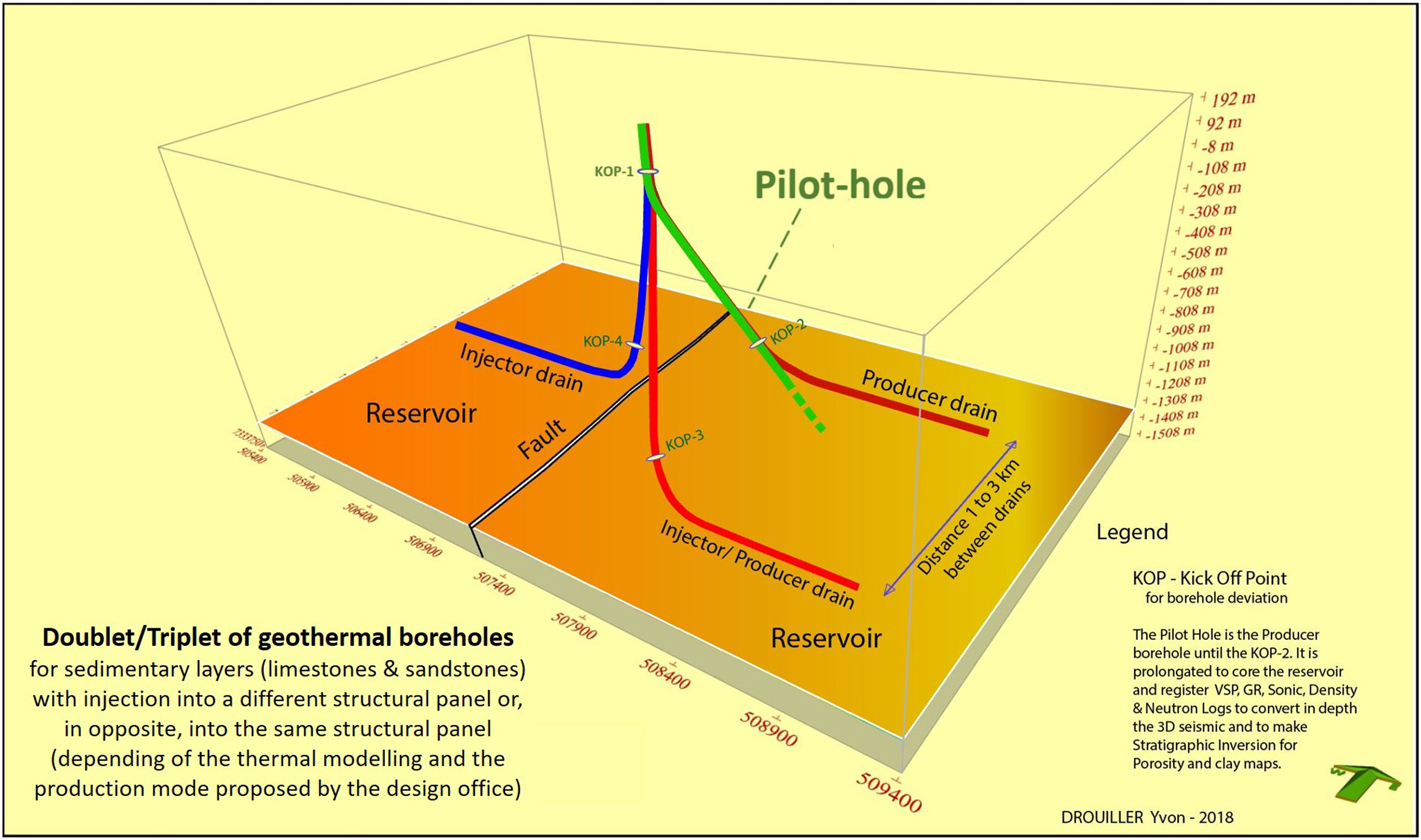