Key geological characteristics of the Saida-Tyr Platform along the eastern margin of the Levant Basin, offshore Lebanon: implications for hydrocarbon exploration

More than 60 trillion cubic feet (Tcf) of natural gas have been recently discovered in the Levant Basin (eastern Mediterranean region) offshore Cyprus, Egypt and Israel, Palestine. Un-explored areas, such as the Lebanese offshore, may yield additional discoveries. This contribution focuses the Saida-Tyr Platform (STP), an offshore geological feature adjacent to the southern Lebanese coastline – part of the eastern margin of the Levant Basin. First, an extensive synthesis of recent published research work, tackling crustal modeling, structural geology and stratigraphy will be presented. Then, a new local crustal model and the interpretation of seismic reflection specifically on the STP are discussed and emplaced in the context of the upcoming petroleum exploration activities in this region. Characteristic structural features form the limits of the STP which is believed to be an extension of the Arabian continent into the Levant Basin. Its westernmost limit consists of the extension of the crustal interface, previously termed “hinge zone”, where major plate-scale deformations are preferentially localized. The northward extension of this “hinge zone” beyond the STP can be mapped by means of major similar deformation structures (i.e. S-N-trending anticlines) and can be associated to the Levant Fracture System (LFS) – the northwestern border of the Arabian plate. The northern limit of the STP (i.e. the Saida Fault) is a typical E-W, presently active, structure that is inherited from an older, deeply rooted regional fault system, extending eastward throughout the Palmyra Basin. The STP is characterized by a variety of potential plays for hydrocarbon exploration. Jurassic and Cretaceous clastics and carbonates are believed to include reservoir plays, which could have been charged by deeper Mesozoic source rocks, and sealed by Upper Cretaceous marly layers. The edge of the Cretaceous carbonate platforms and potential carbonate buildups are well recognizable on seismic reflection profiles. The western and northern anticlinal structures bordering the STP are excellent targets for Oligo-Miocene biogenic gas charging systems. Based on integrating geodynamics, tectono-stratigraphic interpretations and petroleum systems analyses, such plays are well constrained and the exploration risk is therefore lowered. 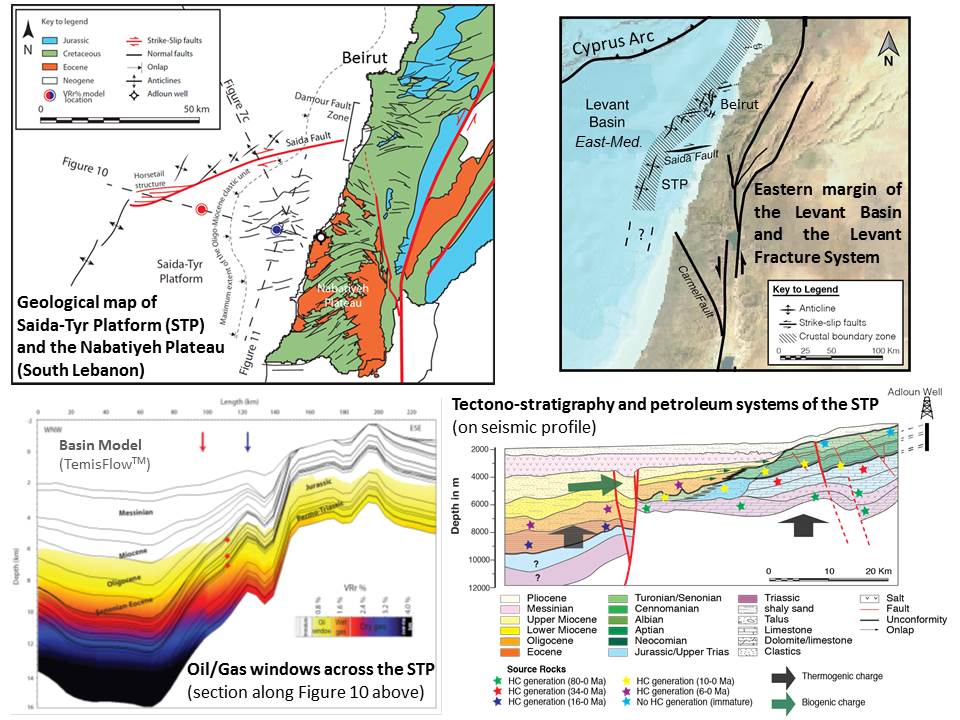