Simulating the behavior of the Human Brain on GPUs

The simulation of the behavior of the Human Brain is one of the most important challenges in computing today. The main problem consists of finding efficient ways to manipulate and compute the huge volume of data that this kind of simulations need, using the current technology. In this sense, this work is focused on one of the main steps of such simulation, which consists of computing the Voltage on neurons’ morphology. This is carried out using the Hines Algorithm and, although this algorithm is the optimum method in terms of number of operations, it is in need of non-trivial modifications to be efficiently parallelized on GPUs. We proposed several optimizations to accelerate this algorithm on GPU-based architectures, exploring the limitations of both, method and architecture, to be able to solve efficiently a high number of Hines systems (neurons). Each of the optimizations are deeply analyzed and described. Two different approaches are studied, one for mono-morphology simulations (batch of neurons with the same shape) and one for multi-morphology simulations (batch of neurons where every neuron has a different shape). In mono-morphology simulations we obtain a good performance using just a single kernel to compute all the neurons. However this turns out to be inefficient on multi-morphology simulations. Unlike the previous scenario, in multi-morphology simulations a much more complex implementation is necessary to obtain a good performance. In this case, we must execute more than one single GPU kernel. In every execution (kernel call) one specific part of the batch of the neurons is solved. These parts can be seen as multiple and independent tridiagonal systems. Although the present paper is focused on the simulation of the behavior of the Human Brain, some of these techniques, in particular those related to the solving of tridiagonal systems, can be also used for multiple oil and gas simulations. Our studies have proven that the optimizations proposed in the present work can achieve high performance on those computations with a high number of neurons, being our GPU implementations about 4× and 8× faster than the OpenMP multicore implementation (16 cores), using one and two NVIDIA K80 GPUs respectively. Also, it is important to highlight that these optimizations can continue scaling, even when dealing with a very high number of neurons. 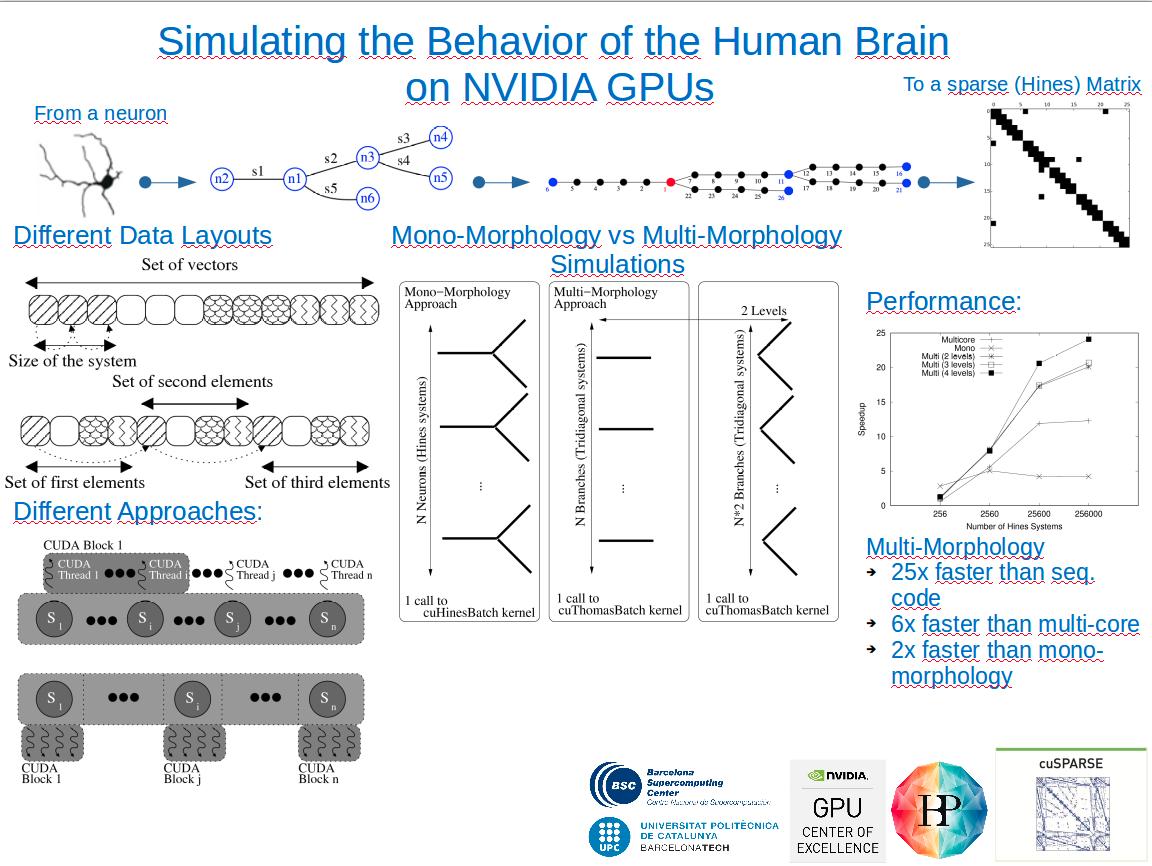