This paper presents a control-oriented thermodynamic model capable of predicting nitrogen oxides (NOx) emissions in diesel engines. It is derived from zero-dimensional combustion model using in-cylinder pressure as the input. The methodology is based on a two-zone thermodynamic model which divides the combustion chamber into a burned and unburned gas zone. The original contribution of proposed method arises from: (1) application of a detailed two-zone modeling framework, developed in a way that the thermodynamic equations could be solved in a closed form without iterative procedure, which provides the basis for achieving high level of predictiveness, on the level of real-time capable models and (2) introduction of relative air-fuel ratio during combustion as a main and physically motivated calibration parameter of the NOx model. The model was calibrated and validated using data sets recorded in two different direct injection diesel engines, i.e. a light and a heavy-duty engine. The model is suitable for real-time applications since it takes less than a cycle to complete the entire closed cycle thermodynamic calculation including NOx prediction, which opens the possibility of integration in the engine control unit for closed-loop or feed-forward control. 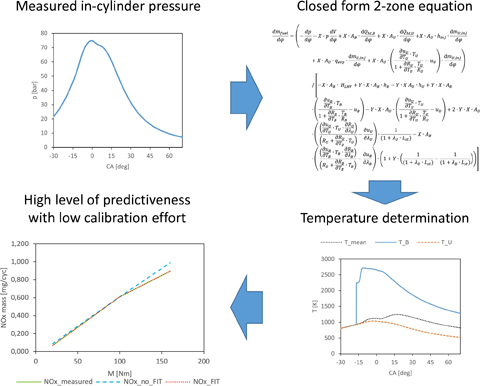